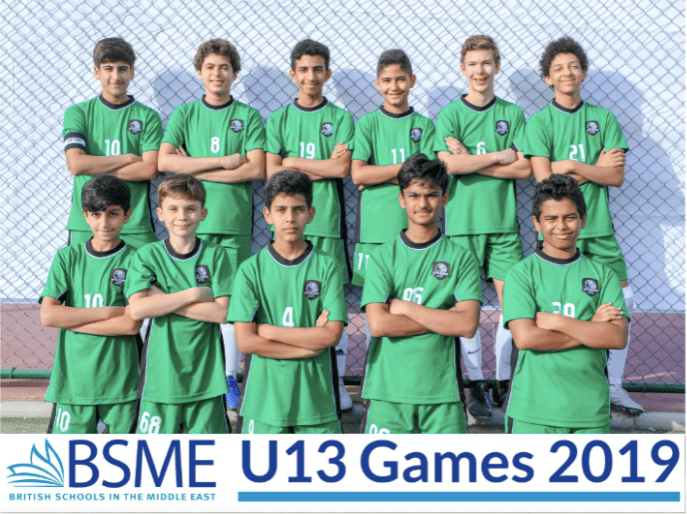 On Wednesday 23rd January twenty two Year 7 and 8 students from Kuwait English School travelled with Mr Horrocks, Director of Sports, Mr Lee and Miss Roderick to Dubai for the Under 13 BSME Games. This was the biggest ever Games with 21 schools from all over the Middle East taking part.

On Thursday the Games began with an extravagant opening at the Dubai Sports City Athletics Track followed by the athletics competition. Kuwait English School had some excellent performances, but the stand-out athlete was Menul Arachchige who made the finals of both the 100 and 200 metre races.

The girls battled extremely hard with Ariadni Trigkaki defending the goal tenaciously to keep the score lines down for the other teams.

On Saturday, both teams were based at Kings School Al Barsha; the girls competed in netball and the boys played football. Miss Roderick and Mr Lee once again demonstrated some fantastic coaching and both teams came 7th in their sports. Ahmad Ali was designated MVP for the boys football and Layan Alwaqayyan was named MVP for the girls netball.

On Saturday night the Games concluded with a very splendid Gala Dinner, a wonderful occasion for all schools to get together to celebrate the achievements of the Games.

Out of 21 schools KES finished in 12th position overall, an outstanding accolade for everyone – students, staff and the school itself.

KES were also awarded the “Fair Play” award, given to the team for showing the best team and sporting spirit throughout the competition.

Members of the High Management headed by Chairman Mr. Mohammed Jassim Al Saddah, School Director, Mrs Rhoda E. Muhmood MBE, along with the Senior High School Principal, Mrs. Janet Carew, all would like to congratulate the students and staff on this very successful venture.