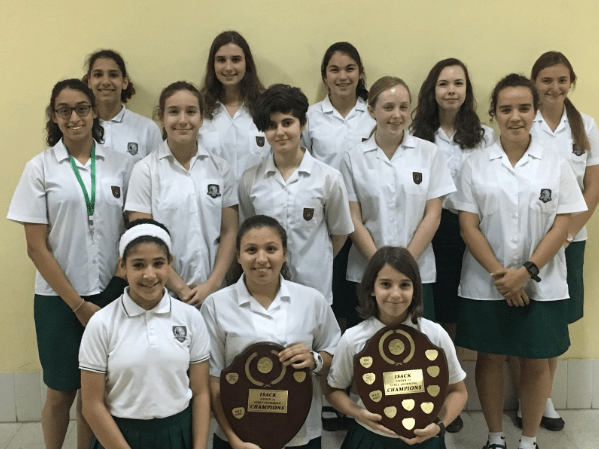 What a year it has been for the swimmers at Kuwait English School. There have been so many highs, it’s hard to know where to begin. Congratulating all swimmers is in order; they have put  a great amount of time and effort into their training this year, making it one of our most successful years.

Way back in term one, we had the ISACK Swimming Championships, after a tough first competition our three ISACK Girls teams all managed to retain their titles for another year. Well done girls!

Our ISACK boys also competed very well this year against some very tough competition from other schools. Finishing in a very respectable 3rd overall, all boys should be proud of their accomplishments this year. Fantastic work boys!

Also in term 1 KES celebrated the Senior Inter-house Swimming Gala where the following records were beaten:

KES  junior swimmers stole the show in this year’s KFSAC competition. Having placed second behind TES last year our young swimmers were determined to change that result this year. The first Gala took place in November after a long hot day at Junior’s Sports Day. Our swimmers were tired but determined to do their very best. They faced some tough competition from seven other schools in Kuwait, but they rose to the challenge, convincingly beating all other competitors by over eighty points.

With plenty of time to practice before the second gala and fire in their bellies, KES Dolphins were unstoppable, winning seven out of eight relays and coming second in one. All of this was too much for the other schools and we ran out convincing winners by 180 points.

A massive congratulations to them and all their hard work as this is the first time in a number of years that KES has won the KFSAC swimming trophy.

Our final event of the year was the BSME Swimming Championships. These took place in Dubai at the Hamdan Sports Complex on the 21st of April 2018. This arena has hosted the World Swimming Championships, hence it was an exciting setting for our first BSME Swimming competition. As it was during the school holidays a limited amount of students attended the event, however they represented the school with pride and passion which was wonderful to see.

The event started at 7am and finished at 5.30pm, which was a long day for some of our competitors, the youngest being in year 2. Here again we faced tough competition from across the Middle East, but that did not stop our swimmers from winning medals and ribbons for their efforts.

Miss Sinead Hughes, Head of Swimming, stated how ‘extremely proud of everyone who attended the event and represented the school so excellently. It was a pleasure to watch everyone compete on this magnificent occasion. I am also very thankful to all staff and coaches who have helped and contributed towards such a successful Swimming year at KES. I look forward to seeing what next year brings’.